“In Timor-Leste 90 per cent of the people are Roman Catholic, although Animism, a traditional belief system. Old trees, natural landmarks, the uma lulik (sacred house) and animals such as lafaek (crocodile) are considered lulik. Lulik comes from the Tetum word meaning sacred, holy or forbidden. In Timor-Leste a priest/padre can be referred as “Amu-Lulik”.

The three big religious celebrations in Timor-Leste are Easter, All Souls Day and Christmas.

Christmas celebrations start on 24 December, Christmas Eve. We prepare a lot of food and clean and decorate the house. Normally people arrive around 6pm. They mingle and share stories, and traditions, and basically have lots of fun and a good laugh. Afterwards, everyone including children will go to the mass. The mass normally starts at 9pm and will take up to three hours. Hundreds of people will attend the church, and many will bring their own plastic chairs to sit outside the church. During the mass there is a lot of singing, reading and a play about Jesus. During the mass, it is tradition for hundreds of people to line up and kiss the little statue of baby Jesus.

At midnight, after the mass, everyone will head back home to eat dinner and open presents. After that, the party starts with a lot of traditional and modern music and dancing. The Christmas Eve party can go until 7am.

In some villages after dinner everyone will go to the home of the Xefe-Suku (head of the village) to party. Some parties will have a live band. It is a great sense of community!

Dinner on Christmas Eve would normally consist of traditional and modern food (influenced by Portuguese, Indonesian, Chinese or Indian food). The traditional food would be Ikan lalar (grilled fish), sasate (satay), katupah (coconut rice packed inside a diamond-shaped container of woven palm leaf pouch), Tukir (stew goat cooked inside the bamboo), midar-si’in berinjela (sweet & sour eggplant). Basically, there is no single traditional Timorese dish that is served at Christmas, and what a wealthier family in Dili would eat could very different from people living in the villages. But dried salted codfish bacalhau, is a very popular Portuguese influenced celebration dish. It can be prepared in hundreds of ways. As for desserts – cakes, sweets and fruit salad are common.

On Christmas day, some families will go to the beach and take the leftovers from Christmas Eve and continue the festive at the beach. Other families will visit relatives and friends who weren’t able to make it for Christmas Eve to wish them Boas Festas do Natal (merry Christmas). It is also a tradition for parents to take their kids to visit their Inan-aman sarani (God parents) and give gifts such as money, chicken, fruits and cake.

Some families will go to the cemetery to put flowers to their love ones that are no longer are with them.

I hope you enjoy my recipe for midar-si’in berinjela.”

Ana Saldanha is the co-founder of Sabores de Timor (Flavours of Timor), which is dedicated to celebrating Timor-Leste’s food and culture. She has served as East Timor Hearts Fund’s volunteer patient support coordinator since 2011. 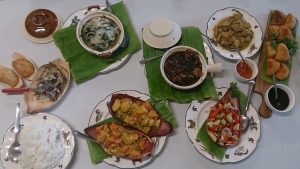 1 ½ tbsp of tamarin sauce or vinegar

1. Fry the eggplant with a little bit of oil until cooked, slice into thin strips and set aside. (You can bake it for healthier option).

2. Stir fry the onion with a bit oil (2 tbsp) until golden brown. Add the ginger and the lemon grass and fry until wilted and fragrant.

3. Add soy sauce, sweet soy sauce or sugar, tamarin sauce and finally add the cooked eggplant and stir well until the eggplant is coated in sauce. (You may want to add some water if it’s a bit dry and if it’s too sour or sweet adjust the taste with sweet soy or tamarin sauce.)

4. Serve with steamed rice or ‘katupa’. 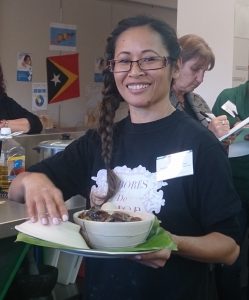